Therapeutic Recreation and Depression: A Meta-Analysis of Exercise Interventions 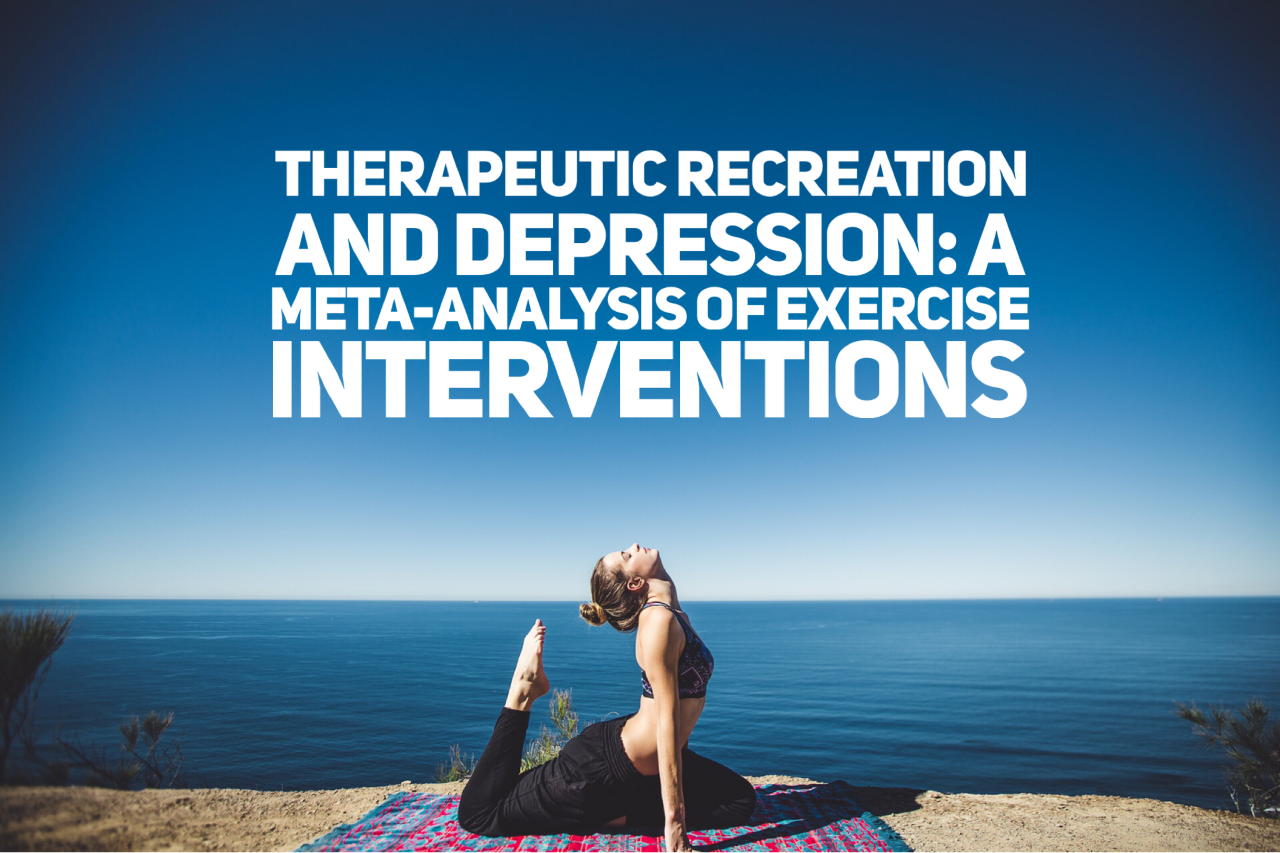 Individuals with depression may experience feelings of sadness, changes in appetite and/or weight, a change in sleep patterns, unusual psychomotor activity, fatigue, difficulty thinking, concentrating, and making decisions, have feelings of unexplained guilt and/or worthlessness, and thoughts of death or suicide.1   Some physiological theories of depression may include increased norepinephrine levels, decreased aminergic levels, and decreased oxygen consumption.4  Alterations in endorphin levels and serotonin levels may also effect depression in individuals.5

There are several common medical treatments for depression.  These include medications, electroconvulsive therapy (ECT), cognitive therapy, behavioral therapy, and interpersonal psychotherapy.2   Some common alternative therapies may include phototherapy, herbal therapy, and recreational therapy in the form of exercise.2

The purpose of this study was to review the literature related to a variety of professions in order to determine the role of physical exercise in reducing depressive behavior among individuals with depression.

Biological and cognitive psychological theories help describe the effects of exercise on the treatment of depressive symptoms.  Biological theory suggests that increasing neurotransmitter deficits provides individuals with numerous psychological benefits.  It has also been found that exercise is able to increase an individual’s number of neurotransmitters.2,5,6   Cognitive theories suggest that the individual is able to decrease symptoms of depression by increasing their body-image, well-being, adaptability, control, sociability, work efficiency and pain tolerance.7  All of these factors are able to be accomplished by initiating some sort of exercise program.   Exercise has the potential to increase mastery, self worth, and self efficacy.5   The exercise intervention is able to increase these cognitions by providing individuals with enhanced perceived capability, which refers to the Social Cognitive Theory presented by Bandura in 1986.5

Exercise has been identified as a possible intervention for treating symptoms of depression.  There have been a large number of studies and literature on the subject that analyzes what types of exercise bring about changes in mood.  Frequency and duration of exercise has also been researched.2   However, there have been problems regarding reliability and validity of studies due to flawed methodology.13

Brosse et al conducted a study that analyzed three types of exercise: aerobic, anaerobic, and flexibility exercise.2   Aerobic exercise is described as when oxygen in used to produce energy.2   An example of this type of exercise is running or walking briskly.  Anaerobic exercise is when energy is produced without the use of oxygen.  Weightlifting is an example of this kind of activity.2   Flexibility exercises are meant to increase an individual’s range of motion such as yoga.  Brosse et al found that all of these types of exercises can reduce depressive symptoms and there are many other research articles discussed in this study that show that exercise can significantly improve depression.2

There are many hypothesized reasons for the effectiveness of exercise.  It has been theorized that central monoamines, such as serotonin, noradrenaline, and dopamine are associated with depression.2   When there is an imbalance in these chemicals it may affect specific regions in the brain related to stress reactivity.  However, studies have not shown that exercise is associated with monoamine levels.  This may be due to the problem of retrieving accurate estimates of CNS levels in humans.2

β-endorphin is an opioid that has a calming effect on the sympathetic nervous system.  Exercise causes a surge of β-endorphin to be released in the blood stream to provide relief of pain associated with strenuous exercise.2   Studies have indicated that post-exercise individuals have elevated moods and an increase in basal β-endorphin level.  However, these reactions may be short lived.2

To carry out this study an analysis of quantitative research was performed.  All articles that were used for this study were peer-reviewed and from scholastic journals.  The researchers focused on finding studies that evaluated whether exercise could be an effective treatment for depression.  Participants that were used ranged from healthy adults to adults with diagnosed major depression.

Throughout this study a variety of databases from the Grand Valley State University (GVSU) library home page were utilized to collect data.  These databases included; FirstSearch with 246 articles, MEDLINE with 5,112 articles, ProQuest with 618 articles, PubMed with 4,698 articles, CINAHL with 1,317 articles, and REHABDATA with 76 articles.  The keywords that were generally used included “depression” and “exercise”.  The four major journals that provided articles for this study were (but not limited to) Perceptual and Motor Skills, The American Psychiatric Association, The Physician and Sports Medicine, and the Handbook of Depression.

To perform this analysis 21 articles were used to distinguish whether exercise was a useful in the treatment of depressed individuals.  Articles selected for this study were selected based on methods used by the researchers.  The studies that were selected contained either a control group and a treatment group, or were based on meta-analysis, survey or questionnaire.  All studies used measurement tools that have been tested for both reliability and validity.  Both the ATRA Annual and TRJ were searched manually from 1990 to present, however articles from these publications were not used due to lack of efficacy research examining the use of exercise as a therapeutic recreation intervention in the treatment of individuals with depression.

While analyzing the 21 articles that were selected a variety of interventions pertaining to exercise were used to evaluate whether exercise significantly lowered depression.  These interventions ranged from aerobic types of exercise such as walking, running, and aerobics, to anaerobic exercise.  An example of anaerobic exercise is weight lifting.  Some of the research studies that were looked at used both aerobic and anaerobic exercises.  Control groups often contained participants who were taking prescribed anti-depressants or no medications at all, and they were not adhering to any structured exercise program.  The outcomes measured were the reduction in levels of depression.

The studies used a number of evaluative tools that have been tested for both reliability and validity.  These tools include: The Beck Depression Inventory, the Hamilton Rating Scale for Depression, the Brunel University Mood Scale, the Zung Self-Rating Depression Scale, the Anxiety Scale of Zuckerman’s Multiple Affect Adjective Checklist, the Subjective Exercise Experience Scale, the Depressed Adjective Test, the Profile of Mood States, the Ray Auditory Verbal Training Test, Fitts Tennessee Self Concept scale, and Rotter’s Locus of Control Scale.  The scores of these inventories were then analyzed to see if a significant decrease in depression occurred.

A problem that presents itself when exercise is being used as an intervention is adherence.  If a person is unable to adhere to the recommended amount of treatments to obtain psychological benefits, then the treatment of exercise should not be used.  Several studies had issues pertaining to adherence in both treatment and control groups.  There have been studies that analyze characteristics that may make an individual less likely to adhere to this type of treatment.  An example of this type of study is Exercise Therapy for Depression in Middle-Aged and Older Adults.16  Individuals who have high levels of anxiety are more likely to dropout of exercise treatment.16  When interventions are being prescribed, information like this should be kept in mind.  However, there are a number of interventions that can be used to increase an individual’s adherence.  This indicates that exercise can be used if precautions by the practitioner are taken to increase adherence.16

Many of the studies that were found focused on relieving depressive symptoms in individuals that were not diagnosed with major depressive disorder.  Several the participants were defined as healthy.  To further confirm that exercise is a useful intervention, more studies need to be completed on patients that have been diagnosed with major depression.

There are numerous implications for Therapeutic Recreation in the mental health field.  Skalko et al indicates that the use of Therapeutic Recreation in psychiatric facilities has and continues to be based upon many behavioral theories discussed within the psychological discipline.29  Biological, cognitive and social-cognitive theories have already been briefly mentioned in this document.  Skalko et al discusses the Behavior/Learning Paradigm, Bio-chemical Paradigm, and Plan and Leisure Theory and explains how these paradigms serve to justify the implementation of TR services.29   The Behavioral/Learning Paradigm is based up on the idea that individuals learn by cause and effect.29  Skalko et al stated that an individual’s behavior and personality is a result of learned action.29  When the intervention of fitness/exercise is applied to a patient that is suffering from mental illness, primarily depression, the patient is able to physically and mentally obtain benefits as discussed in the theoretical framework and findings of this article.  When an individual is able to find relief from their symptoms, they begin to practice exercise/fitness to achieve a greater level of wellness.29

The Bio-chemical Paradigm discusses the correlation of behavior and changes in neurotransmitters  and other chemicals.29  As discussed previously exercise and fitness programming produces changes in beta-endorphin levels that in turn affect emotional stability.29  Skalko et al states that exercise/fitness is pertinent to many therapeutic recreation programs, therefore the bio-chemical change that occurs during exercise is primary in the treatment of persons with mental illness.29  It has been confirmed by many disciplines that Play and Leisure Theory is relevant to normal growth and development, and numerous skills such as; motor skill development, social skills training, stress management, relaxation, coping skills, self expression, and physical fitness to name a few.29  The development of the skills listed above influences an individual’s thinking, emotional health, and behavior.29

Starr LaMonde is a Certified Therapeutic Recreation Specialist. She earned her Bachelor of Science degree in Therapeutic Recreation and Minor in Psychology from Grand Valley State University in 2005. Starr has 15 years of experience working as a mental health professional in various settings in Southeast Michigan. 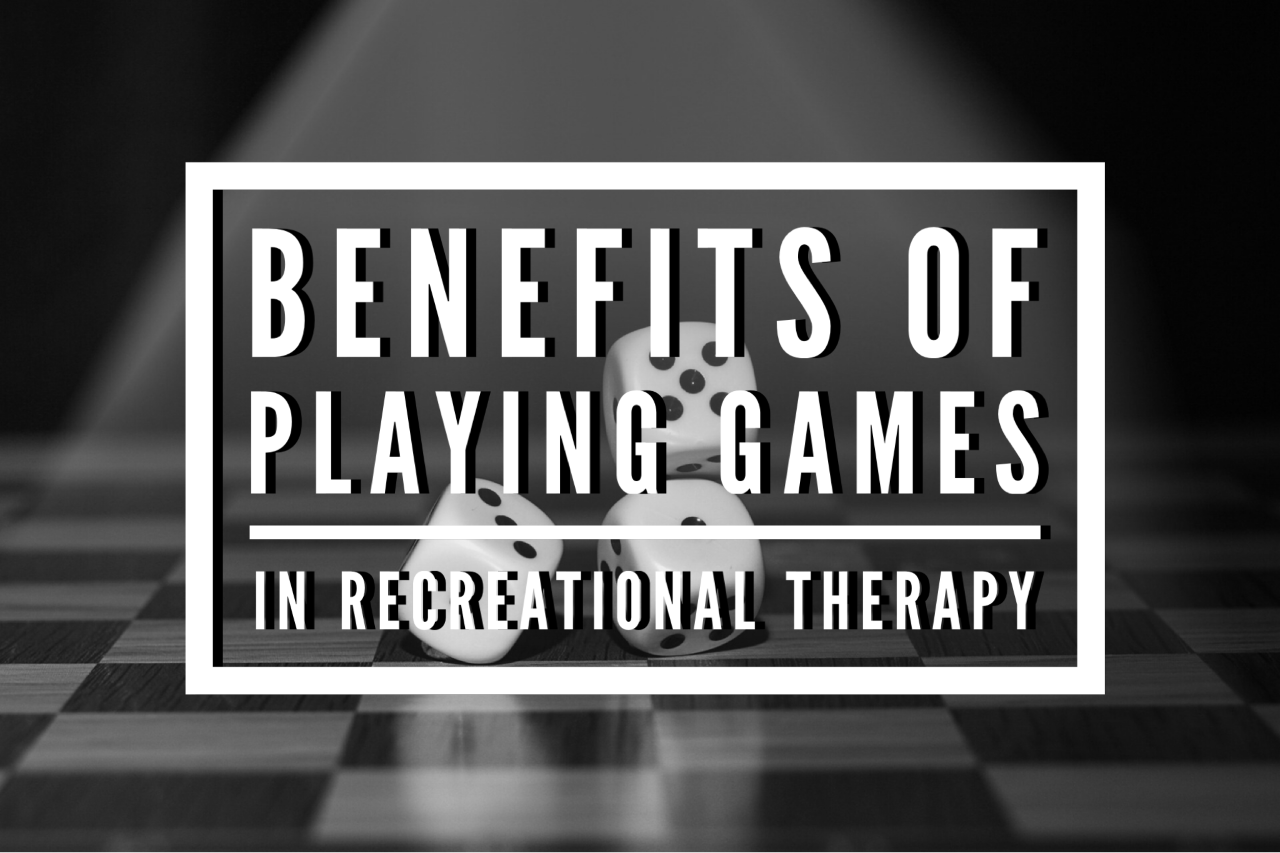 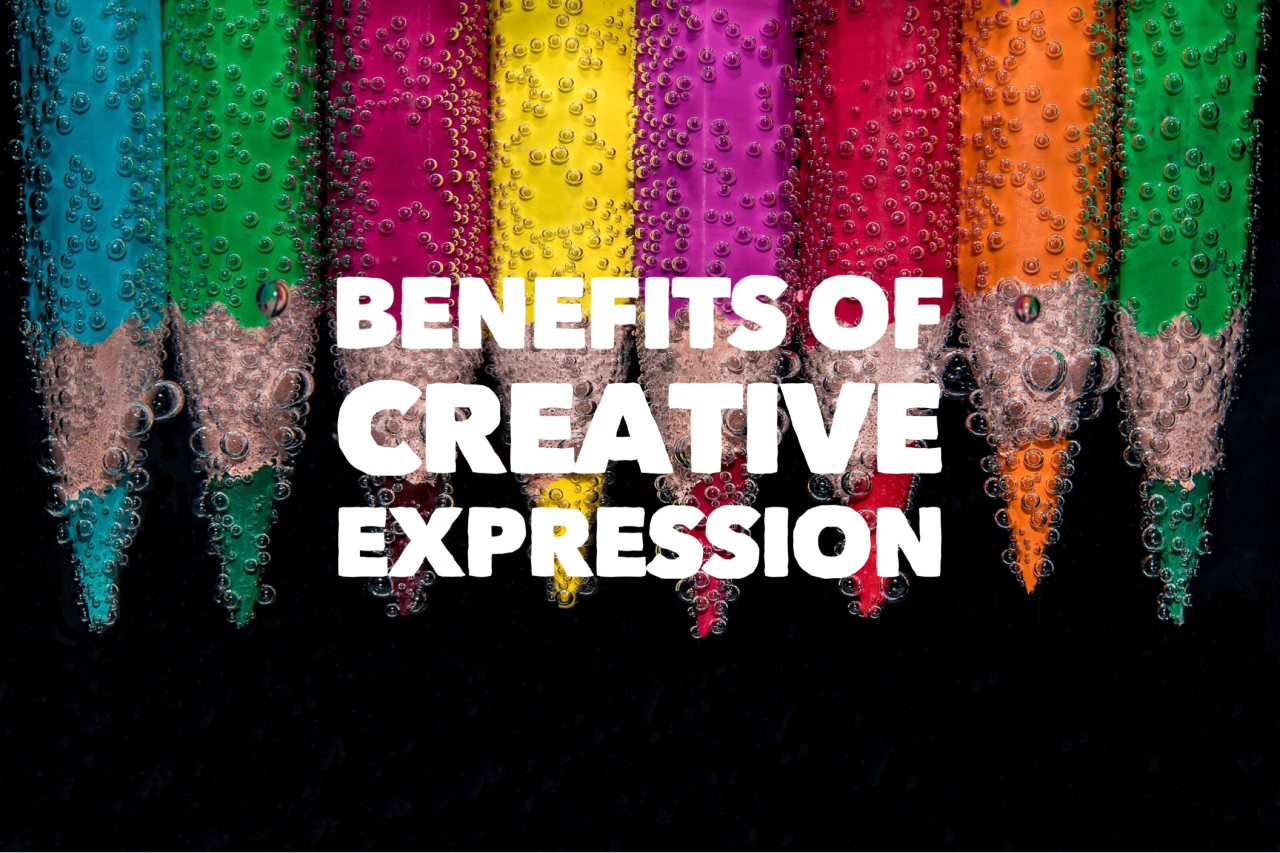 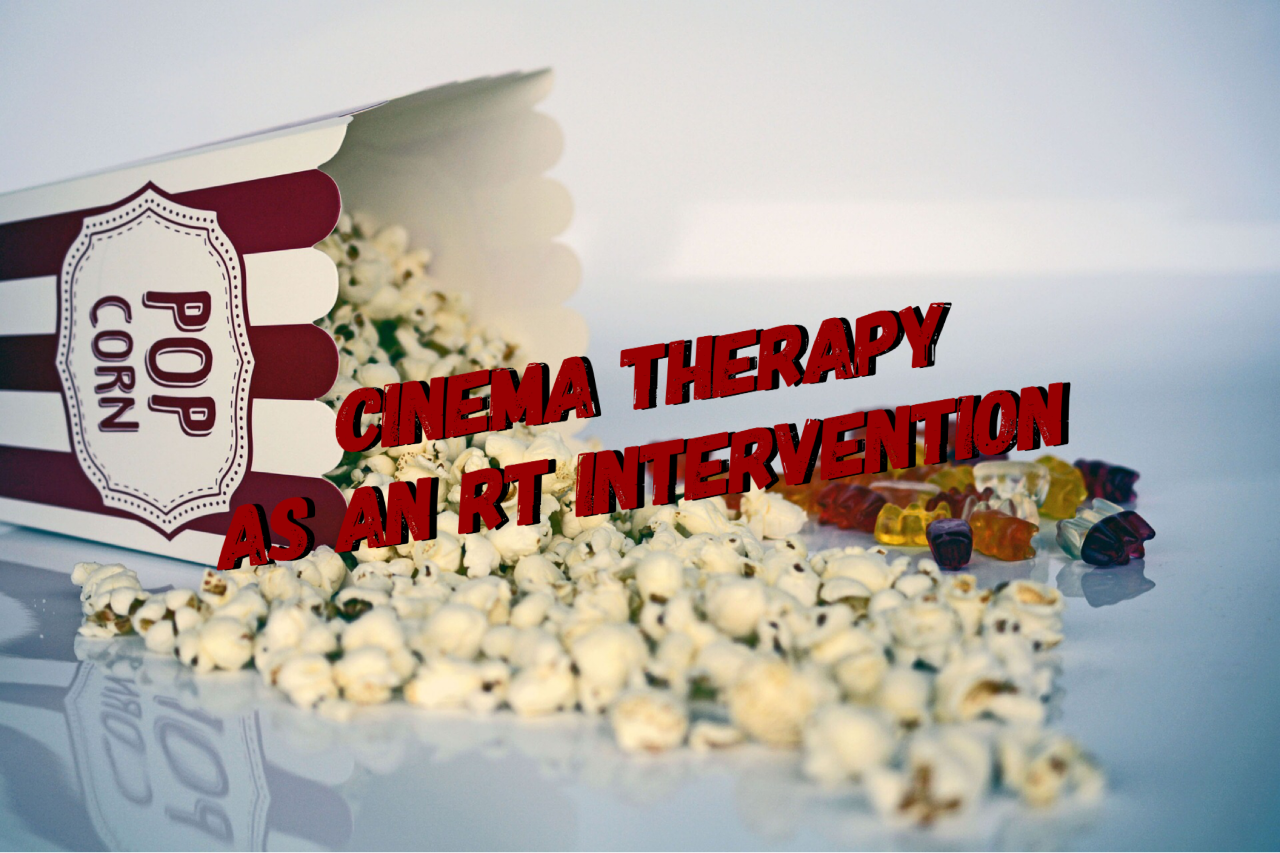